Join us for a very cool and rare treat: a re-creation of an electronic music radio program from the late ’80s and early ’90s, which was infamous for their Halloween Shows! Brian Magill is no stranger to our show, and has been making electronic music since the early ’80’s. As part of this work, Brian eventually hosted a radio program at KLCC, Another Green World, as part of their attempt to cater to the interests of electronic music fans and artists, that was on the rise.

However, once a year – on or near Halloween – Another Green World would get… weird. Long sound collages and other forms of musique concrete would take over their broadcasts, often the last things that would air on the station before it would go off the air for the night. The show quickly became infamous, and casual listeners would think something was wrong with the radio. Instead, they were merely catching a glimpse into the musical work that Brian and his co-host, Nathan Griffith, would create, in the moment, on the air. 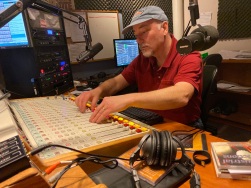 Tonight’s show is an effort to recreate Another Green World as best as we can, just in time for the show to offer a typical Halloween show, as you might have heard almost 30 years ago. Brian brought in records from his collection, stuff that he would have played on the show then. I actually took a step back, and let him run the board; aside from an interview setting up the concept at the beginning, this is all Brian, and you get to hear something that no one else has heard in three decades.

In Hour 1, settle in for hearing what a typical episode of Another Green World might have been like 30 years ago. Then, strap in for Hour 2, where Brian takes us on a sound collage journey through his favorite artists, and what radio used to sound like.

Along the way, we get heavy doses of Fervent Torpor, AND a number of unreleased, unavailable, and previously unheard recordings by Brian from over the years. If you ever thought to yourself, “I bet that artist has a ton of other recordings I haven’t heard yet,” This is just the tip of the iceberg. Brian could have done two hours of his own unreleased material, which would have been as good as the stuff on his record, “1000 Years of Solitude.” Instead, you get to hear it in this show, tonight. 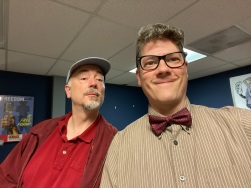 Shows like this are something special, and you cannot (and will not) hear stuff like this anywhere else. This is a very unique Halloween Performance / Broadcast, and it’s this kind of show that makes me excited to keep bringing you radio like this.

The Last Radio Station On The Left