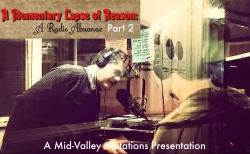 The writing was on the wall from the beginning, and A Momentary Lapse of Reason was doomed (if by name alone) to be short lived. Getting off the ground initially was extremely time consuming. Half way through, KPSU experienced all new management, and they were unsure of who I was, what the show was about, and when they could schedule it. (The new staff were unaware that I was celebrating my 10 year anniversary at KPSU.)

And part of the confusion was the fact that I’d quite KPSU twice previously. While it is difficult to talk about this without ultimately pointing fingers, the fist time I left for due to “creative differences,” and the second time was to pursue new projects that, at the time, were very promising. That being said, the name of the new show was far too appropriate; while I thought I was making one joke (regarding Pink Floyd’s return to recording after their “final” cut), it turned out the “momentary” aspect of the program was entirely too relevant. By the end of July of the 2014, the show was over, and by September, the last Momentary Lapse of Reason show went out under the disguise of the last Closet Radio broadcast to go out on KPSU. (Sometime the details of Closet Radio‘s ascendence and disappearance should be covered by someone, but for now, I’ll have to leave that to a future someone.)

There were several factors that led to the end, but one was a simple matter of technical problems. KPSU, at the time, regularly had issues, with equipment, access to the studio, the turntables (as most notably heard on the Closet Radio sessions, which had a hum that was only identified afterward running throughout the performance), and sometimes, there was a band sitting in the studio, wanting to play. This is, of course, the adventure of college radio, but when you rely on the full studio to create your program, these limitations can be very frustrating. On at least two occasions, the station was mysteriously closed and we couldn’t do a show. (We ultimately podcasted in place of those, an entirely other permutation of this show that is also not represented here and now.) And in the end, the station just didn’t know what to make of the show. Trying to explain a collage / interview / talk / music show was hard, and they never understood why it didn’t work to have a rock band recording in the room next door while Rikki & I were trying to talk. (Not to mention how hard it was to mix.) It was clear, for both of us, that KPSU was not the place for this show.

Add on top of all of this availability. In spite of my best efforts, KPSU didn’t make it easy to hear A Momentary Lapse of Reason. Sometimes, the show was not listed on the site. Other times, the feeds weren’t working, so you couldn’t even hear us live. When we did manage to get incomplete recordings, getting them properly documented in a way for listeners to find and hear were a challenge, and at one point, it seemed like I had lost all the source recordings for the program. To say that it was little heard (and badly recorded) is an understatement, so at the very least, bringing these recordings to a wider audience is to finally do justice to these shows that have, more or less, languished in digital oblivion.

Another factor that competed for attention at the same time was my own proximity to Portland, where KPSU is located. Very quickly, due to a number of reasons that are boring and tedious, I found myself moving to Salem rather suddenly. While I initially commuted to PDX for work and radio, I soon landed a job in Salem, and getting to Portland was no longer easy or possible for the time slot we were inhabiting. Initially, this was only going to be a temporary roadblock; both Rikki & I were working out ways that the podcast version of the show could be done remotely, and there were talks of us changing the show entirely to The Secret True History of Rock & Roll, a new idea that grew out of A Momentary Lapse of Reason. But all these plans were scuttled when Rikki moved Closet Radio to KRXY, and then, moved away from Portland entirely. At that point, the nail in the AMLOR coffin was officially pounded in place.

Obviously, something like this is about a time and a place. Rikki & I did some incredible radio at KPSU, and we both enjoyed our shows, and this one in particular. But it was clear that our lives were moving in other directions. But for one year, we managed to create a show that was absolutely a representation of what we are like when we are on the radio together, and that alone is something that is worth quite a bit.  My hope is that, buried in the mix here somewhere, you can hear Miss Rikki and I, laughing and rocking out, so incredibly pleased with ourselves that we got to make such wild radio.

Even if it was only temporary.