There was a point where I used to acknowledge a lot more of those we have lost recently, and I called the series The People Who Died, natch, which seemed funny and a great way to pass the time. But as the years add up, and more people pass, the idea seems less fun to me. Going through the lists of people who have gone, dredging up the memories… it just feels like a lot less of a “cool” idea, and more of an emotional drain. 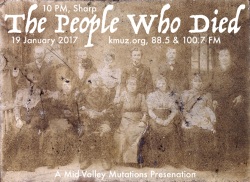 However, there are so many we have lost recently – many of whom I actually quite enjoy as artists – that it seemed like I needed to press forward. We are all coping with loss of some kind, and maybe through the celebration of art that we enjoy, we can find a way to process all of this loss and feel good about it, even if in some small way.

This program includes samples of Leonard Cohen, Katherine Dunn, a PBS special about Sam Shepard, Monty Hall, and an interview with / lecture by Sir Terry Pratchett. During the podcast-only bonus section of the program, there are also samples of Roger Moore, Adam West & June Foray, too. They are not credited below, and I’m starting to think that, aside from absolutely essential credits, I may just start doing something like this. Obviously, I would love your input. How would you like to see the show notes written in the future?

Regardless, I think it works for the flow of this show, and I think it’ll work for you, too. Give it a shot. And, of course:

The People Who Died

Part I: That’s The Way It Goes

Part II: I Don’t Go Out Much Anymore

Part IV: Running Out of Time