Enviornments (The Organization of Sound: field recordings and musique concrète Part III) (#119)
Picking up where we left off last time, we are continuing our journey through field recordings with two more hours of atmospheres and thoughtful soundscapes.

The centerpiece of hour one is something from a new discovery I’m enjoying, the “Environments” LPs, which was very much the inspiration for this show. The recording of the Be-In from 1969 is not only a wonderful time-capsule of a different era, but it paints a wonderful picture through sound of an era that feels so long ago. This recording gives it weight and presence that is worth hearing all the way through. 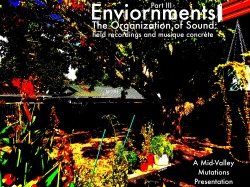 In hour two, Mini-Mutations takes over, to deliver an hour of field recordings that are mixed and remixed to create a continuous hour or sounds.

And, of course, the podcast version has almost 25 minutes of bonus material. So you know you wanna check that out.

Can you feel the fall setting in?

This episode contains excerpts from the videos ‘The Field Recordist’ by Sonic Fields & ‘Microphone Basics’ by Akash Thakkar.