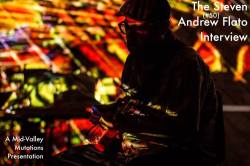 It is the sad reality of geography and time that prevents us from knowing more about the local scenes that exist everywhere else.  While we get to know the stars and players in all of our local scenes, there are people everywhere that are working hard to create incredible art and music, and because we cannot go to a bar in my town and see them play, I almost never hear about them.  Right now, there are so many places that have vibrant scenes I will never get to know.  And, occasionally, a few that I do get to know, eventually.

I met Steven – and got to know his work – entirely through the Inter-Web-A-Tron, and when I realized he didn’t live near me, I became fascinated with this scene that he was a part of, so far down south.  It wasn’t much later that Signifying Something launched, and as kindred spirits charting parallel paths, I had to talk to this guy about his show, what he does, and how he approaches art.  It only made sense, and as we made the arrangements and more shows dropped, it was clear that this was someone I needed to chat with.

we discuss art, making music, the challenges, the podcast, and a whole bunch of stuff in-between, with samples of his work from over the years.  Then, sit back, as we have an impromptu MKUltramegaphone performance, where we improvise behind the conversation, and then jam out at the end of the show.  It’s a pretty sweet broadcast, very casual, and just the way I like it.

Part I: Out of The <Obvious Reference>