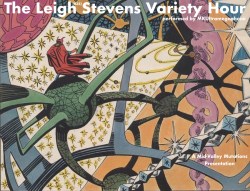 Pressing on into new territory, we find ourselves here, cashing in on a noted celebrity to help keep the program “current.”  Perhaps the AV Club will profile our show now that we’re dedicating an hour to the work of Leigh Stevens, knowing that they will be able to siphon clickthroughs by stealing my thunder?  Who can say?  The music will speak for itself, in the end, even if the crumpled suit and Bob Barker microphone I’m using to see the the program isn’t wining over any converts. 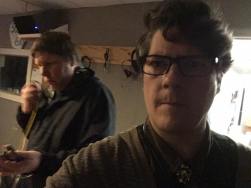 Did someone say gimmicks?  Because we’ve got ’em.  Consider this a debut of sorts for MKUltramegaphone, a new combo of sorts, who added audio commentary and texture to the program throughout the hour.  Cut-ups and electro-wizardry layered with studio soundscapes and original musical compositions.  As I walk up and down the audience walkway, paying more attention to my microphone cable than anything else, I ask: what more could you want?

Well, cliché, simile, cliché.  Because, etc, and so on.  As a tribute to all The Waiters out there who are always fashionably ready for anything, we offer them these new opportunities to listen for the name-sake recordings buried deep within within this program, in a way only our ferns at Firesign Theater can deliver.  In-jokes within in-jokes!  It’s enough to leave anyone puzzled & befuddled.

pecial thanks to Leigh Stevens, musician and engineer, for supplying the bulk of the audio material we played on the program today.  Leigh has been making music since the early ’80’s, and is one of those rare, undiscovered gems that is lost in the deluge of modernity and digital audio.  Tapes, man.  It used to be about the tapes!  (Shakes head back and forth.)  If you dig his stuff, you can contact him at: leighstevensmusic@gmail.com.

Part I: Down On Foster’s Farm

* Throughout the program, horridus & Austin as MKUltramegaphone were mixing samples and other bits to create the final product.  The notes for these recordings are: