It’s been a while since my last All Vinyl show.   Part of the notion of Mid-Valley Mutations was this aesthetic of the cut-and-paste, and it is VERY hard to do that on a record, if you want the record to survive.  And, admittedly, there is a slightly bigger time commitment with LPs and whatnot.  I’m often in front of a computer, so it is easy to prepare material throughout the week.  But I’m not always in front of my record player, even though I would very much like to be.

There is also the condition of space and time.  I don’t have access to a studio where I can have three turntables running all at once, except in the studios at KMUZ.  There is a certain amount of “live” energy to a show like this that is not present elsewhere.  I’ve been attracted to records for my entire life, because the entire element of the listening experience, from pulling the album from the shelf to tucking it back afterward, has a charm to it that is unparalleled in other listening experiences.  While I have used them all, and each have their virtue, I have more records than anything else, and because of that, my biases easily show. 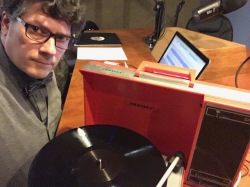 It is a bummer, then, that these All Vinyl shows are not more frequent.  But, that makes them all the more special.  I try to take my time, play things that are just as mutated as the rest of the program, and still give it a flavor of something that I usually deliver as part of the weekly show.  In that area, I believe I delivered.  While I’m always shocked at how few records get played during shows like this, I am thankful to have such a wealth of material to draw from.  Every time I enter a record show I think about the possibilities of playing my purchases on the radio, and to that end, my collection has only gotten better.  Hopefully, the proof is in the pudding.

For those of you who follow the MyFacester+ and the Blog, you may have noticed that this is not the show that was advertised.  While I was in the middle of producing the New Year’s Program, I was also in the process of moving my home and my studio to a new location.  On Christmas Day, our home was broken into at some point in the evening, and in the process, my studio and my wife’s home office were ran-sacked.  They took our computers, my mixer, banjo and guitar (among other things), our bicycles, our lawnmower, a pile of unmoved records, and a whole bunch of other meaningless items, both personal and sentimental.  We returned the day after Christmas, having spent the day with family, to find our house trashed and anything of value gone.  It was a horrifying experience, not to mention that we had to then clean the place after they overturned our carefully packed boxes.

Suffice it to say, that New Year’s show was never finished, and may never be, depending on the state of our hard drives that they (thankfully) left behind.  In the meantime, while I hate to plug something like this in this way, if you are thinking, “this is awful, and I’d like to help,” then I ask that you do either one of the following:

Donate to the YouCaring Page that Julie Eaton (music editor at The Salem Weekly) set up, where you can help us get some money so we can replace some of what was stolen.

Send a care package to Mid-Valley Mutations, if money is not in your means.  To be honest, some of my favorite records were stolen, and while the bulk was moved before the break-in, there are many that I keep re-noticing are gone.  And, considering the financial loss, it will be a while before I am able to buy new records.  If you can, maybe send a little music my way?  I could use the smile, and it will find a way onto the show, certainly. (Check the contact page if you want to send something in.)

Even in light of this, I’m trying to remain optimistic and look to the future.  We have some great shows coming up, and 2017 can only get better.  Mid-Valley Mutations has had a very good year, and we hope that we can continue that into the next.  Transitions are hard, change is scary, and moving on is very hard.  I’m hoping that with a little radio diversion, we can all find a way to think about what’s to come without panicking.

Thanks to everyone who supports the show, and listens from home.  It is for you I do this, and from you that I draw hope.  You are wonderful, you are beautiful, and without you, there would be no show.

Part I: Our Globe