This week we pull out all the stops for a Halloween broadcast the likes of which you have never heard before!  It is one thing to play Halloween Music on the radio, and I’ve been doing that since 2003.  But this week I decided that it would make more sense to tell ghost stories, the true essence of Halloween.

Fortunately for me, a number of friends and fans of the show called in to help contribute to the show.  Both Ricardo Wang & Uneasy Chairs call in, marking both of their second appearances on the program.  (Stay tuned for a live Uneasy Chairs performance on the program on November 11th!)  And, Geekly-Update host Jason Ramey calls with a particularly scary story about the very radio station I was broadcasting from!  (I hope he’s okay.)  The problem is, if the station is haunted, will I even survive the show?  There’s only one way to find out…

The centerpiece of this show is an interview with Bob Bucko Jr., not only a friend of the show, but the man behind Personal Archives Records, a label that has been very kind to Mid-Valley Mutations, and kind to music in general.  Bob in a wonderful person who makes deeply personal music, and it a sight to see on stage.  I met him a while back when we got to play a show together, and I have been a die-hard fan every since.  Since I’ve been plugging the tours and playing his records on the show, it made sense to have a chat, and pal around with a guy I haven’t seen in a while.  Plus: he has a great ghost story about staying at the Chelsea Hotel!

We had so much fun with this program that we may well do more Ghost stories next week, so stay tuned.  In the meantime, what is up with this ghost that keeps popping into the KMUZ studio? 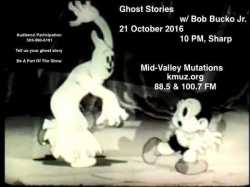 Part I: For Boys & Girls