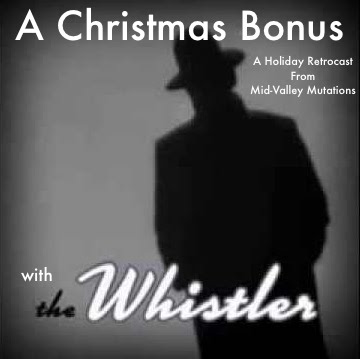 A Christmas Bonus with The Whistler!
(Detective Dexter Roland is several sheets to the wind, and has found himself at a private party with a number of well-known folks and… The Whistler?  Originally broadcast 25 December 1944. This episode was retrocast on 21 December 2016 as Mutation #30.1)

You’re taking a walk home and you stumble across a group of drunk holiday well-wishers leaving The Blue Note late into the night.  You tighten up your coat to quicken up your pace to beat the cold.  You automatically assume that you should avoid them at all costs, that they look like trouble, that if you let yourself become in any way associated with these obvious miscreants it could mean disaster for you, and for the rest of the night.  Why, just the other day you heard a story about someone who was on the run from the law, because of a Christmas Bonus he received?

Join us, as Detective Dexter Roland – intoxicated with both spirits and those of the season – is off to listen to scary stories told by none other than the legendary Whistler, the very same from radio and film.  Along the way we bring you holiday fun and music by a host of artists I’m always itching to listen to, and in the end we have a jolly good time, as we let Dexter guide us this holiday season.

The centerpiece of this show is an episode of The Whistler from 1944, where the very well-know theme kicks our show into high-gear.  (Performed by Dorothy Roberts and Wilbur Hatch‘s orchestra, who wrote the piece for the show.)  It should be noted that Dorothy Roberts, was really only paid to do the whistling once, and it probably wasn’t for very much.  But the show was a hit, and ran for 13 years.  Her tune was heard hundreds of times, in hundreds of households, and her name was largely forgotten for years.

It’s funny how so many programs of this era all began with the sounds of someone walking and whistling, which has since become shorthand in radio (and later, film and TV) for “night.”  It worked particularly well on radio, as the sterile environment of the radio station meant that you wouldn’t be hearing the sounds of everyday life – of cars, birds, people talking and chattering.  Sitting alone, with a radio, and hearing echoey footsteps, and then… well, it is a singular experience, and it sets the tone for what The Whistler was going to bring you.

J. Donald Wilson set the tone for the program, who was a writer and producer for CBS in the early ’40s.  He was a hired gun, and the idea of a crime show seemed like an easy win.  Crime radio programs were huge in those days, and Wilson rationalized that if you bill the show as an “anthology,” you can save time by not having a recurring cast.  Wilson relied on a lot of tried and true storytelling ideas, and decided to connect the episodes by having one recurring character, a narrator, who was rarely a part of the action, but was more like an announcer.

As the stories that were getting churned out got darker and darker, Wilson made The Whistler’s character darker, until he was an almost sinister character.  Borrowing heavily from Inner Sanctum, Wilson crafted an eerie crime show with an almost – but not quite – supernatural component.  In a tried and true horror motif, he was fond of trick endings where a new bit of information in the last moments of the program can often reverse the entire effect of the show, but he deployed this tactic only when necessary, and only when the effect would really work because of the story.

In 1944, Wilson had to leave the show, and George Allen took over as producer.  This wasn’t even strange for this program, as the voice of The Whistler changed from time to time too, the most consist of them being Bill Forman.  Bob Anderson was the regular announcer for the show, and with a core group at hand, Allen realized that it was important to stay the course.  They had a good thing going with the initial success of the program, and Allen decided he wanted to keep this going by sticking with what worked.  To that end, The Whistler formula became very easy to identify, very easy to produce, and was a hit with audiences.

William Castle – yes, that William Castle – soon bought the rights to do a series of Whistler pictures, and in the waning years of the programs success on the radio, The Whistler was on television in 1954.  But as anthology shows started to fall out of vogue, and dramatic radio was loosing the edge it had in light of the popularity of Rock and Roll, ratings for The Whistler declined, and the show quietly disappeared, like a whistling stranger in the night, walking further and further away.

There is certainly an old-fashioned-ness to the way these stories develop.  Having a narrator like this really evokes a kind of radio that had fallen out of fashion, even in the ’40s, and was then a throw-back to adventure-serial type radio programs, that where heavy on the use of a narrator to catch everyone up from day to day.  But the hallmark of The Whistler that was innovative was the way the character was chilling.  Inner Sanctum used a host that told horror-jokes, and had a bubbly co-host that reminded him to do the ad-reads.  But The Whistler was very, very serious, and could string someone along with a description of an inner monologue that was terrifying.  While these might sound a little corny, if you were a kid in 1944, you would have LOVED The Whistler.

Stay tuned, as Detective Dexter Roland has fallen in with yet another group of after after party celebrators, when he takes in a late-late show by Detective Richard Diamond, the singing detective.

A Christmas Bonus with The Whistler!

Side A: By Hook Or By Crook

Side B: Dark Thoughts