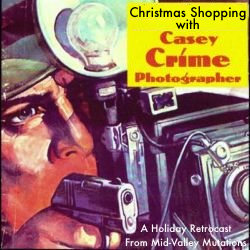 After listening to Johnny Dollar’s story in our previous installment, the only thing that made any sense to Detective Dexter Roland was to drop into The Blue Note tavern, where he could take in a few drinks and a few tunes before the end of the night.  Little did he know that he was going to run into Flashgun Casey and his partner, Ann Williams.  Before he could even get his bearings, Dexter is roped into hearing them recount their holiday shopping trip that went quite a ways off the rails.

Crime Photographer (and later, Casey, Crime Photographer) was a franchise that was born out of the Black Mask crime fiction scene in the ’30s, created by George Harmon Coxe, who was keen to expand Casey into as many mediums as possible.  Magazines, novels, and film were all avenues that Casey found himself taking pictures in, and his run on radio lasted almost 12 years with a number of different actors and formats on CBS.  The gimmick of the show – that they would drop into The Blue Note tavern, where Casey and Ann would listen to The Archie Bleyer Orchestra, and later the The Teddy Wilson Trio.  In this episode, the music in the bar is provided by Herman Chittison, to great effect.

While Casey is not as well known as his Johnny Dollar or Phillip Marlowe (or other detectives of the era), during his time on the air Crime Photographer was incredibly popular, and was as well recognized in his day as the other stars of his era.  It’s always a pleasure to drop in on Flashgun Casey, and he seems to have sent me off on drunken adventure that could lead me in just about any direction.

But that’s a story for another day.  Until then,

Christmas Shopping with The Crime Photographer!

Side A: How We Remember Them To Be

Side B: Decomposing Trees

One thought on “Christmas Shopping with The Crime Photographer!”