Here’s an audio essay centering around two selections from The Strange Doctor Weird, a radio program from the 1940’s featuring the voice of Maurice Tarplin as the titular character, written by Robert A. Arthur and directed by Jock McGregor.  The program is, in many ways, a sequel to The Mysterious Traveler, a program from which many of the Doctor Weird stories were culled from.  These versions, told in 15 minute segments, appeared on a number of stations as material that could easily fill out an hour or programming, and was most well known as being sponsored by Adam Hats, who could afford their own radio program in those days.

Accompanying these stories is a live performance by me, as I mix and apply effects to sounds made in the studio, as well as the sounds of recorded music by The Black Noise Orchestra and Yellow Crystal Star. 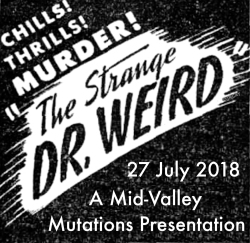 The recent thunder and lightning – very atypical this time of year – has filled our town with lights and sounds that are not usually part of the typical makeup of our fair city.  In many ways it reminded me of nothing less that The New Gods themselves traversing the threshold of a Boom Tube, a sound so dramatic that is insists that you listen, above all other things.  It was with that in mind that I decided to let The King by my guide, and put together some spacey wonder, ambient landscapes, and droning rock music that would make the man himself proud.

I didn’t get to mention it during the show, but I always like to draw attention to Sailboats whenever I can.  Little known, and even less seen, they manage to capture some of the eeriest and most beautiful strangeness every time I listen.  They are on the Pecho Grande label, and while their site says that much of their catalog is out of print, I bet if you asked nicely you could locate a copy or two.  I highly recommend checking out Sailboats, as well as the other incredible things they have to offer.

During this show, Miss Rikki & Tunacan Jones was lurking around in the studio, and they helped influence the direction of this audio essay, obviously. But between Mr. Tarplin & Kirby guiding the way, it’ll be hard to resist this broadcast.

This episode features samples of “Journey Into The Unknown” and “The Man Who Knew Everything” by The Strange Doctor Weird!, originally aired on 21 November 1944 and 20 March 1945. 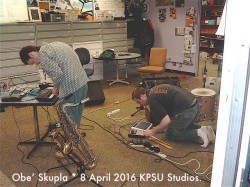 Part II: Journey Into The Unknown 1

Part III: Journey Into The Unknown 1

Part VI: The Man Who Knew Everything