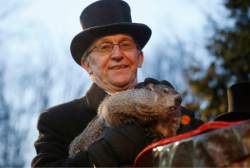 (Here’s a holiday treat that I like to trot out this time of year. This broadcast was originally aired on KPSU in Portland on 3 February 2009.)

Today’s episode of Blasphuphmus Radio asks the question: where have all the Groundhog songs gone?

Well, there’s still six more weeks of winter according to February 2nd lore, so today I’m featuring songs about Ground, Hogs, and Shadows. Who knows how much longer this season will last? Only the Groundhog’s Shadow, knows! Bwahahahahahahahahaha!

I was absolutely shocked at how little Groundhog music there was to play for this show. Any musicians out there looking for something to write about, now’s your chance!

About halfway through the show I give a rambling and disjointed history of Groundhog Day. Most of the information was culled from several passes over the Inter-Web-A-Tron, so it’s as reliable as anyone else is these days.

I think I prefer the second half of the show myself.

Lastly: this is my last show during the 3 PM slot on Tuesdays. The powers that be have given me a chance to shine on the citywide broadcast signal, starting this Saturday, February 7th! So if you live in the Portland area, tune in at 1450 AM on Saturday in the Portland / Vancouver metro area (just after What’s This Called?), and 98.1 FM on the Portland State University Campus, to hear me do what I do best.  You can also stream the show live at kpsu.org.

Those of you who podcast the show: nothing changes. You’ll just start getting the shows on Saturday instead of Tuesday.

Saturday’s show is tentatively titled, “Re-Introduction, Again.” Pleased to meet you… won’t you guess my theme?