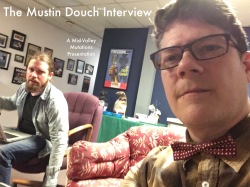 Some people want to help make shows in their community come together.  Other’s want to write some songs. Mustin Douch – Justin, as he’s locally known – not only books shows in both Portland & Salem, but plays in an incredible number of local groups, all of whom have their own stories and interesting anecdotes.

But this show is largely about the man, and not those bands, though we do play some samples of the music he performs, as well as tunes he just happens to enjoy. Taking up nearly all of the two hours with just chatting, we cover the entire spectrum of topics, from composition, performance, the scene itself, new technology, and everything in-between.  Really, this is more like a friendly chat, and as we cover all the bases, we offer a glimpse into the like of a working artist and musician.

Justin is probably as humble as he is funny, and an excellent example of someone who is trying very hard to make art and music happen in his area, even if he has to make it happen himself.  And while we do get into the nitty gritty of art and music, we also just goof around and have a good time, too.  Sometimes, there’s someone behind a lot of the shows that you hear about in the area.  This is a chance to get to know one of the people who doesn’t usually get the spotlight.

Here are some links to his groups: Summer Eyes, Child PM, MARC & The Horsejerks, and Nasalrod.

Part I: “I’ve been accused of being a musician.”

Part III: “Just looking off into the distance sometimes and just thinking.”

Part V: “How do other people cope with life?”