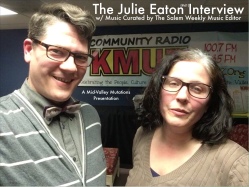 Breaking format slightly (not much, really), this week we pick the brain of Salem Weekly Music editor Julie Eaton, who is a Salem resident, musician, writer, and supporter of the art and culture of this town.  While we had been circling around the idea of collaborating on a show together, it was mostly a ploy to get her behind a mic so I could ask her about her connection to the town.  It isn’t often that you get to have someone who you can ask about what came before you, and in this case, I get to hear the music, too.  This is, obviously, part one of a nearly endless series.

This is pretty much a “locals only” episode, and moreso, less “experimental” than my usual fare.  But don’t let that scare you off, or even suggest that this is a “normal” episode.  In fact, featuring local music that is not vetted and organized by the mainstream media is an extremely unusual move for radio, and even among community radio stations, the music is often in the classical or bluegrass vein, not too loud, and rarely features garage bands.  It’s not that rock and roll is really even that weird in 2017, but there are times when it feels like your artistic voice can be lost in the din of Instagram likes and endless clever web videos.  Even presenting this kind of culture as being “on par” with theater is absolutely something our show is all about. 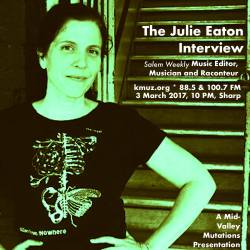 One thing that was great about this show was to see someone haul in so much physical media.  Often radio anymore is done on flash drives and through “files,” so when Julie kept handing me actual vinyl and CDs, it was a real joy.  (In fact, you can hear our live “cassette mishap,” as we tried to play something that just doesn’t work out.)  All part of the live radio experience, and we hope that next time, the tape deck will work.

But, a good chunk of this show is Julie herself, not just with the tunes, but in conversation.  It’s her personality, her history, her role in this community, and her sense of humor.  It’s all there, and I had a great time unveiling it to radioland.

Here’s to a great slice of the local scene.  It’ll be fun to bring you more and more as time goes on.

Part I: Get To Know Salem, Oregon

Part III: Other Corners Of Salem, Past & Present