As 2016 rolls to a close, any reasonable assessment of the last 12 months has left all of us a little worse for wear.  As I try to re-focus my efforts for 2017, Mid-Valley Mutations is taking a few weeks off for the holidays, to recuperate and prepare for what will be a much better year, no matter how you slice it.

But we don’t want to leave you hanging, as you have come to expect weekly entertainment, and weekly entertainment you shall receive.  So we’re still bringing you some good old fashioned holiday programming, just in time for the Christmas Season.  We are featuring two Old Time Radio Classics, stories that involve detectives solving Yule Tide mysteries that play themselves out over two half-hour blocks.  But that’s not all!  We found shows where the leads are played by two stalwart performers of the Golden Age of Radio: Vincent Price and Frank Sinatra!

First, Vincent brings you a tale of The Saint, a character that he portrayed on the radio from 1947 until the end of the radio run in 1951.  Vincent is a fantastic actor, and his style and sophistication come through in his portrayal of The Saint, who is as concerned with being a gentleman as much as he is concerned with solving the case.  It is worth it to hear Vincent perform the character of Simon Templar, an actual saint in world where crime may strike at any moment.  The Saint is often – as he is in this story – accompanied by a cab driver named Louie, expertly played by Lawrence Dobkin, no stranger to Detective Radio Programs.  (He played Archie in the radio adaptations of the Nero Wolf stories, and guest starred in The Adventures of Philip Marlowe, Jeff Regan and Yours Truly Johnny Dollar.)  This story is sort of typical of what you would find of The Saint.  A little action, a little comedy, and plenty of chances for Vincent and Lawrence to spar, verbally.  The recipie continues to work, even 60 years later, and it is a great addition to our Holiday Programming. 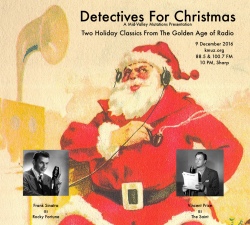 Second, Frank Sinatra plays a lesser known character from the world of noir fiction: Rocky Fortune.  This makes perfect sense, as Sinatra was experiencing extreme popularity in post-war America, and he was the kind f personality that radio usually enjoyed.  To top it off, it seemed to have the right juice behind the show, as the creator was none other that Dimension X series creator George Lefferts.  There was also a certain amount of fourth wall breaking that happened on the show; Rocky references Dimension X, in one episode, sings lines from the Sinatra catalog, and would throw in references to From Here To Eternity as often as possible.  Perhaps that was the nail in the coffin for the program, or perhaps it was Sinatra, who was never the greatest actor, in spite of his incredible voice.  The show only lasted 25 episodes, and strangely, the final broadcast was less than a week after he won the Academy Award for acting, solidifying his career in film, making his radio career merely a footnote.  Still, this holiday installment of his program is not only a great way to close this particular episode, but is a perfectly holiday tale, best told on the radio.

It’s just one of the many ways we like to celebrate the holidays, on Mid-Valley Mutations, and we hope you enjoy listening to Old Time Radio the way we do.  And, stay tuned!  There’s all sorts of podcast-only treats, and further Old Time Radio goodies that will hit the airwaves in the coming weeks.  Get into the Yule Tide Spirit, with plenty of radio for your ears.

Part I: The Saint!