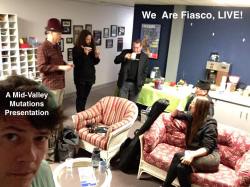 When I first brought this show to KMUZ, I wasn’t sure if I was going to be able to get live music to work.  Salem is off the beaten path, the show is late at night on a Friday, and our station isn’t known for cutting edge, experimental acts.  I mean, I’m trying to change, that, but the reputation certain didn’t proceed me.  So, I’ve been very excited to see how many bands have responded positively to the show, not just because I play their music and talk about how great they are, but actually wanted to do something live on the show.

Live radio is one of the few special things left in this world that seems to carry with it something that has a little magic left in it, and it thrills me every single time.  There’s something about having a band in the studio, gear turned up full blast, that makes the FM airwaves seem to rock that much harder, no matter how good the music might be.  I’ve been hooked every since I started in the ’90’s – and before that, as a fan going back to the ’80’s – and it’s nice to see that, even in light of there being a million other alternatives that are vying for your time and attention, there are still some people who get a kick out of those live moments.

I was astonished when I made the off-hand suggestion that they should come and play on my show, and got such an emphatic, “Yes!” from the group.  I had pitched that we should do something via Periscope, or some other digital service, giving them the chance to have as much comfort that it would increase their chances of doing the show.  When they actually wanted to show up, I may have tipped my hand as to how excited I was.  As a younger man, I took in several of their shows, and they are an incredible act that makes me excited to be an artist.  Having them on the show is not on a dream come true, but a real pleasure that I will never forget.

Format-wise, this show is a little different than many of the shows I’ve done in the past.  There are no audio overlays, I’m not mixing and matching a story overtop the performance, and there is no interview as part of this show.  We agreed that, to really take in what Fiasco does, it should just be live.  Their performance runs almost 50 minutes of the program, and this is a solid, stellar performance.  It would have been inappropriate to do anything other than present the music, so that’s what you’re getting.  Pure, un-cut Fiasco.

If you are not already doing so, I would recommend that you check out their Bandcamp Page, which is being constantly updated (and added to) with tons of incredible stuff.  I would also check out their MyFacester+ Twinstablr Page, where you can find out about their shows (and occasional tours).  Fiasco is something that needs to be seen, live, and if you have the chance, I urge you to do it.

Don’t forget to tune in next week, because we have DJ Victrola of The Guitar Shop coming in to spin records and tell stories about what it is like to be both a radio and music nerd in the 21st Century.  (It’s also an excuse for us to hang out, as we just don’t get to see each other that often.)