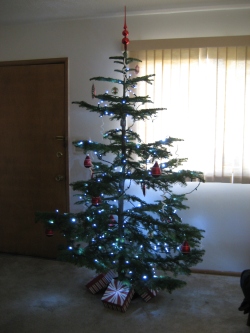 The Origins Of Christmas
(Featuring a brief history on this troubling holiday, and some songs that attempt to cover an array of feelings associated with this time of year. Originally broadcast on 17 December 2011 on KPSU.)

Probably the biggest frustration I suffer from this time of year is one of Holiday Burnout: I just get sick of deluge of Christmas Songs, fake consideration for our fellow man, and the pain-in-the-ass errands that you have to run during a time of year when it is constantly cold and dark 20 hours a day.  The plastic sheen of wonder and good tidings cover layers and layers of deception and misdirection that appears to go unnoticed by the majority of the public.  And who could blame them?  If I could put out of my mind all the things that frustrate me about this time of year, and medicate myself to the point where I have visions of Sugar Plums too, then I might stupidly smile and obliviously wish everyone a happy something or other, that may actually conflict with their religious beliefs, too.

So, I decided to tackle the problem head-on with a radio program that uncovers the origins of this holiday, with an attempt to give my own perspective a much needed positive boost.  It wasn’t easy; while I am not a Scrooge or a Grinch, I would say that I don’t find it easy to be as merry or happy as most people want me to be.  I could feel one way or the other about Christmas, and while I enjoy the time off and the chance to spend time with friends or family, years of retail job exposure, combined with a fairly virulent case of atheism, has provided me with endless examples of how awful people are to each other, and how easily they try to hide or mask it.  It unsettles me to the point of being down on the holidays.  Fortunately, I’m not the only one.

The connective tissue of this show comes from a History Channel documentary, The History of Christmas.  I have to admit, I’ve lost a bit of faith in The History Channel over the years, and their work now is shoddy (at best).  But this one is old enough that it has things like research in it, and the narrator sticks to just relating that research, and doesn’t cut to bone-heads who don’t have any expertise, or rely on weird creepy music followed by a narrator asking a question.  (“But who WAS Santa, really?”)  Plus, I use about 4 minutes of it, total.

The rest of the show features holiday songs that fit in a little more closely with my view of this time of year, and of the world in general.  Of note are two great compilations that I drew heavily from, and have been wanting to use for a while, but never had the chance.  The first is from an Andy Cirzan compilation from 2009, called The Cassette Years: Part 2.  Andy is a Christmas Music collector, who has been putting together wacked-out comps on tape (and now, CD and radio via Sound Opinions), of the weirdest holiday music you’ve ever heard.  His comps are a real treat, and they make even the most annoying holiday tunes seem listenable.  The other is called Black Christmas, which I obtained a few years back, and can’t for the life of me remember where I got it.  If anyone has any information about it, I would be most appreciative.  It contains a number of great holiday songs that are a little more realistic than the average fare.  The show is divided into three sections: Punk Songs, Rock Songs, and the Hanukkah / What Does It All Mean? wrap-up.  I am extremely happy with the way this show out, and I think it sounds great.  I hope you enjoy it too.  (Spoiler Alert: The show does end on a bit of an “up” note, if you’re worried about slogging through the horrors of religious subjugation, and songs about the bad things that happen this time of year.)

That’s it for this week.  Stay tuned for a Podcast-only Christmas Eve special next week.  Be good to each other, and happy holidays.

See you in seven.

The Origins Of Christmas