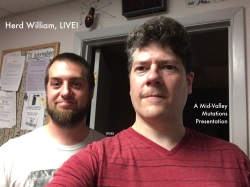 Each show we make is completely unique, and in many ways, I’m not even sure what each new show will bring. I prepare and plan for sure, and it isn’t that I wander in each week tabula rasa and discover what “radio” might be, this time. But like jazz and improvisational music, there is a point A and a point Z, and between those two there are a million different possibilities each week.

Herd William‘s hit-and-run assault on our program was not only unpredictable, but incredibly short.  He managed to load in, perform twice, interview for about 20 minutes total, then pack out in less than an hour. It was certainly something to behold, and a lesson for those who need lots of set-up time when they want to play.  Fortunately for us, he did not skimp on the performance.  Both sets are a high-octane blast of experimental noise all his own, and this is probably one of the best ways to get to know his particular kind of music.

But that’s not all!  In addition to my own 20 minutes of live mixing and mashing, we also kick-start the show with a world premier track by Aldo Calrissian, friend of the show and soon to have a new record that you can hear very soon.  In the meantime, this show starts off with a sample, and you heard it here first.  As if that weren’t enough, we top things off with another installment of Dimestore Radio Theater, this time presenting a Rocky Jordan story that is about as Noir as they get. 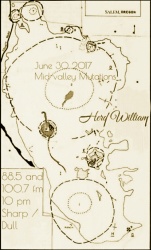 In a lot of ways, this one is a variety show, and I couldn’t be more pleased with this kind of thing. This is certainly a good way to prepare for the show that we’re putting on at the end of July, featuring some doom and drone metal combos that you will not want to miss.  (Including Herd William and Don Haugen.)  But more than anything, this has the feel of a show that I wish I had tuned in at home, scanning the dial, looking for something new to hear.

And that, alone, is an accomplishment in and of itself.