With politics as it is, artists passing away, and the entertainment world completely flipped on its head, sometimes there is nothing left to do but hop a train with a new friend, and play music well into the night, jamming along with the sound of the clack of the tracks.

Fortunately, A Moment’s Sound — Scott Eave to his just-met friends — is always game for a musical adventure. He’s been playing guitar for ages, exploring sounds in an improvised manner, and searching for ways to connect with other artists, and we immediately clicked when we met.

Strangely, this is the only time we’ve played together, which speaks to the free-and-easy sound that we both enjoy exploring. There’s something about hopping trains with someone where all of the stresses of the everyday world are no longer weighing upon us. Strangely, we approached this one quite differently than when I normally have a guest. We just jumped right into this one. We go live just after the top of the hour, A Moment’s Sound kicks in by the end of the first quarter of an hour, and we go all the way to Midnight. We do sort of stop around 11 to chat for a while, but it fit the mood of where we were going, and I think you’ll enjoy the way this all turns out.

So gather round the Hobo Jungle, and let me and Scott tell you a story about what it really is like to live in the world today… which begs the questions, why aren’t we all Riding The Rails? 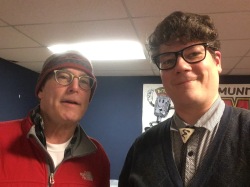 This broadcast felt so much like a “back to basics” broadcast – for so many reasons – that I absolutely loved hosting Hobo Maker.  A consummate professional and accomplished guitar player, he produces walls of sound, and those of you who caught one of his two performances on Make Music Day know what I’m talking about.

More than anything, this was a return to form in that: Hobo Maker is, thankfully, local.  While I love hosting acts that are from anywhere, anywhen, it was so cool to find out that this kind of thing is available right here in Salem.  My hope with Mid-Valley Mutations is that I could create a home for artists like this in the area, and when stuff like this happens, I’m always happy.  It also happens that this gent is a stand up fella, too.

So, tune in for a cross section of the work he’s done, a live solo performance, an interview, AND an extended jam with MKUltraHobophoneMaker, which was a lot of fun.  MKU has been slightly absent from the show lately, only because my bandmate has been out of town.  Having the back together really felt good.  Sometimes, I can’t believe I get to do this every week.

As promised in the show notes, here is a link to the Corvallis Experiments In Noise page on MyFacester+ Twinstagramblr, where they keep everyone posted about upcoming shows. As of yet, they haven’t posted a full line-up for that date.  But soon.

Part I: Word Round The Campfire

Part III: In The Hobo Jungle