Continuing our annual tradition, DJ Victrola and I put up a piece of plexiglass between us in the radio station lobby, and watch a bunch of old horror movies, talking about some of our favorite films.

Then, keep listening, as Victrola offers up a reading of a wonderful Lovecraft story, and then in hour two, I read the chilling story, “Lost Hearts.” 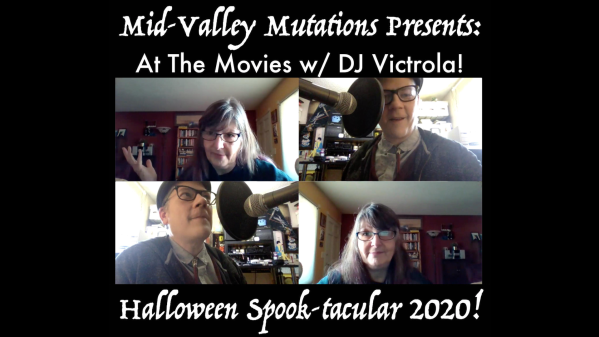 It’s always nice to visit with friends when you’re having a party like this, at to wrap up our Holiday broadcasts this month, we have the incomparable DJ Victrola, joining us to help clean up the studio, and catch up regrading all things spooky.

We play lots of music and stories relating to ghosts and All Soul’s Day, and we check in with her about her program, and how you can hear it now. I love spending time with DJ Victrola, and this is an excellent and casual show that was a ton of fun.

We close with the timely, “Nov. 1st,” by Crackerbash, a song I listen to every year on Nov. 1st, for as long as I’ve known about this song.

We’re getting ready for that OTHER holiday season, so stay tuned.

The End of Fake Noose

While we haven’t done all that many of these Ghost Stories shows, very few people have wanted to come into the studio and tell their stories live either. But DJ Victrola is not like other DJs, hosting her very own program – The Guitar Shop – now in its 21st year, with no signs of slowing down. When she offered to come in and tell old Philly Ghost Stories, I knew we had to do this one live. And you, dear listener, get to reap the rewards.

While I don’t want to spoil too much about her stories, I will say that you should stay tuned, as she not only features appropriate tunes to complement her stories, but sets a mood that is perfect for strange happenings in a haunted house. And: Cyclopsycho composed a bespoke Ghost Tune for this broadcast, which we get into almost immediately during the show. (You should visit cyclopsychosite.com for more music, or check out the live performance on Ricardo Wang’s What’s This Called?)   Plus: we get to hear one of the all time best Lord Buckley recordings that is not only about ghosts, but spans two holidays in one. 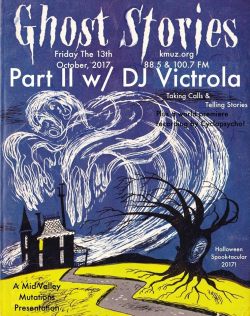 Stay tuned to the very very end, and hear a very special treat: The Professor & Miss Rikki from Closet Radio call in. Miss Rikki, DJ Victrola and I all go back to KPSU, when we were on after each other for a spell in the days when Rikki & I hosted A Momentary Lapse of Reason. We had an excellent radio reunion on the air, and Rikki spills the beans about normal childhood happenings that absolutely count as ghost stories, even though she just shook them off.

This one has a personal touch that is well worth a listen, and we’re not even finished with the holiday season. (BTW: Shoutouts to Steve & Lisa, from Vicky.) This is a Friday The 13th that you must hear to believe.

Part I: The Ghost of Lost Mind

History of The House, Disappearing Steak Sauce, The Misplaced Wallet

Part VII: The Lady in the Hatboro House & The Bucks County Hitchhiker 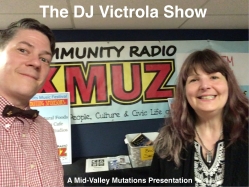 In many ways, DJ Victrola is my radio sister, who was not only my guide when I came to KPSU, but a kindred spirit who was dedicated to music and exploring great stuff as she was dedicated to radio.  In fact, she’s made a life out of it, getting started in the late ’70’s in Philadelphia, and chasing that dream across the country to its most recent incarnation, The Guitar Shop, a 20-year odyssey where she has explored virtuoso guitar players and artists what do not get as much radio play as they perhaps once did.  She and I both love exploring – on broadcast radio – music that gets shorted in most radio landscapes, and because of that we have become great friends in the last 12 years.

An hour is just too short for hanging out with Victrola, and while I did get a short overview of her career out of her during the interview, this does not even begin to scratch the surface of what an incredible personality she is.  (We didn’t even get to her Les Paul story.)  But what we do get is a nice selection of some of her favorite music, an interview, and a chance to meet someone who continues to impress me with her dedication to the craft, and her interest in music that, in many ways, is just not “cool” in the here-and-now.

For those of you who enjoy what you are hearing, you should certainly check out her program, which has been around now for over 20 years.  Her blog contains almost 10 years of archives, with interviews, live guests, theme shows, and her famous “Christmas In July” programming.  You can also follow her on The Social Medias, which I also recommend.  So few people are on the air for as long as she has, and the accumulation of that kind of experience is worth tuning in for every week.  I mentioned that you should also check out the time that Eric Skye & Tim Connell were on Victrola’s show.  If you like what you hear here, I think you’ll like what you hear there.

Now, some of you might be saying that this is a bit off the mark for an “experimental” show when you take a look at the playlist.  And I admit, when I said that she and I do a show, I was thinking we’d do a Noise Shop.  (She and I are both huge fans of improvisational guitarists and noise artists that use the instrument to incredible effect.)  But as we discuss on the show, the music she loves is often relegated to similar areas of the musical spectrum as experimental music, and there’s much cross-over between the music we both love.  Experimental radio is about presenting things that you cannot hear elsewhere, and if that is the case, then Victrola and are I doing basically the same thing.

Part I: Night Of The Living Victrola